SOUTH SHORE — Every week, black men have an opportunity to “bring their burdens” to South Shore’s MANifest Wellness Sundays and discuss them with like-minded men.

The free circles are held every Sunday from 1 to 3 p.m. at the Quarry Event Center, 2423 E. 75th St. They’re led by brothers Obari and Ayinde Cartman of Real Men Charities.

Playing rhythms on the djembe, dununba, sangban and kenkeni — much like unfiltered communication — represents a return to “ancestral traditions,” Cartman said.

“Seeing how we get to play them and then share that with the community as they walk by, I think it’s a powerful thing,” Cartman said.

The male-only caveat is strict, at least for the discussions — one woman who came with her friend was asked to leave once the drum circle ended.

The circle is closed off to help men “go deep and be vulnerable” with other men, Cartman said. The idea is to practice combating “the culture of masculinity” in a safe space first, before applying it to everyday life.

“We kept hearing that that was a need, that men needed a place to go be themselves and not have to pretend, not have to posture, just be authentically human,” Cartman said.

Sunday’s discussion centered around the role of forgiveness, in the wake of Botham Jean’s brother hugging Dallas police Officer Amber Guyger after she was sentenced to 10 years for Jean’s murder.

Attendees — most of whom were participating in the circle for the first time — openly discussed whether retributive justice is valid and how they would emotionally handle the murder of a loved one.

The sessions are structured like a natural conversation, which is to say there is little structure.

Cartman would occasionally restate the week’s focus on Botham Jean and forgiveness, but attendees were free to follow each other’s tangents or speak with passersby about unrelated topics.

In September, he hosted a workshop on the cultural acceptance of mental health issues in the black community; it followed one on raising black boys in August.

“Whatever men need to heal, to grow, to connect, to build, we want a consistent space to do that,” Cartman said. “We have the Quarry, a black-owned space where we can kind of do whatever we want.”

Michael Wilson, a yoga instructor and first-time attendee, said the circle was similar to yoga in its ability to turn energy into action. After Sunday’s session, Cartman and Wilson discussed opening future sessions with yoga.

By holding the session outside, on the corner of 75th Street and Phillips Avenue, neighbors didn’t have to join the circle to resonate with it, Wilson said.

“That is the energy that we were cultivating out here: The energy of, ‘Yes, we should come together, we should speak our minds,’” he said.

Taurean Henson, a teenaged attendee from Garfield Park, said he didn’t even know what he was getting into — his mom just drove him across town and dropped him off.

Henson said he felt “in the middle” about how comfortable he was in the circle. He said he doesn’t often get the chance to be open, and only does so depending on how he’s feeling at the time.

“At first I didn’t want to come, but when I sat right here, it was alright,” Henson said. “The stuff y’all was talking about, it was open. … When I feel like going, I’ll probably come back.”

Open communication isn’t just a pie-in-the-sky ideal at these sessions. An incident on Sunday made clear the organizers practice what they preach.

During one drum session, an attendee got up and apparently spit on an ice cream man who parked near the circle. The attendee was upset at the smell of exhaust coming from the truck.

Cartman and Wilson asserted their control over the situation, insisting the driver not call the police. After an intense conversation, the ice cream man smiled, shook Cartman’s hand and drove off soon after.

By then, the attendee had disappeared, and the police did not arrive.

Cartman said the man was “dropping gems” at an earlier Quarry event, so he was disappointed the man didn’t participate in the discussion before causing a scene.

Members of the circle then discussed the incident. Attendees condemned the man for not communicating his frustrations properly, but said the driver should’ve understood no one wanted to see the man arrested for his lack of “anger management.”

Such a heated incident might derail other events, but not the healing circle, which continued on for another hour without moving inside.

In fact, it reflects the role Cartman said he hoped attendees would play in the circle, given before the incident occurred.

“You coming would be a part of whatever it is that week,” Cartman said. “Your presence will influence the direction of the conversation. There’s no way to take away from it; there’s no way to interrupt it.” 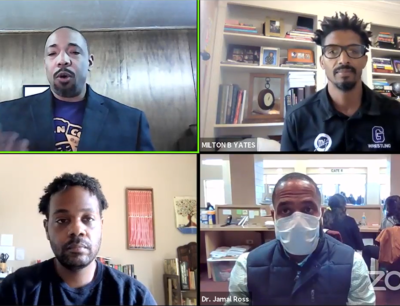 Beyond Survival: Prescriptions for Black Men

﻿ #PriorityHealthMonth A day of wellness with experts from our communities! Sponsored by Chase, Shawn Michelle&#821

HYDE PARK — The Kwanzaa principle of kuumba, or creativity, is the focus of Brown Books and Paintbrushes’ holiday c 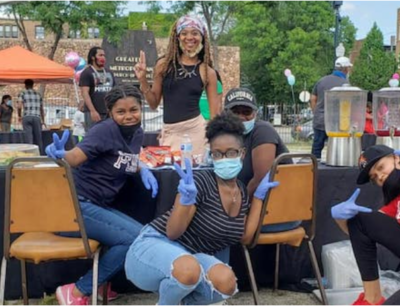