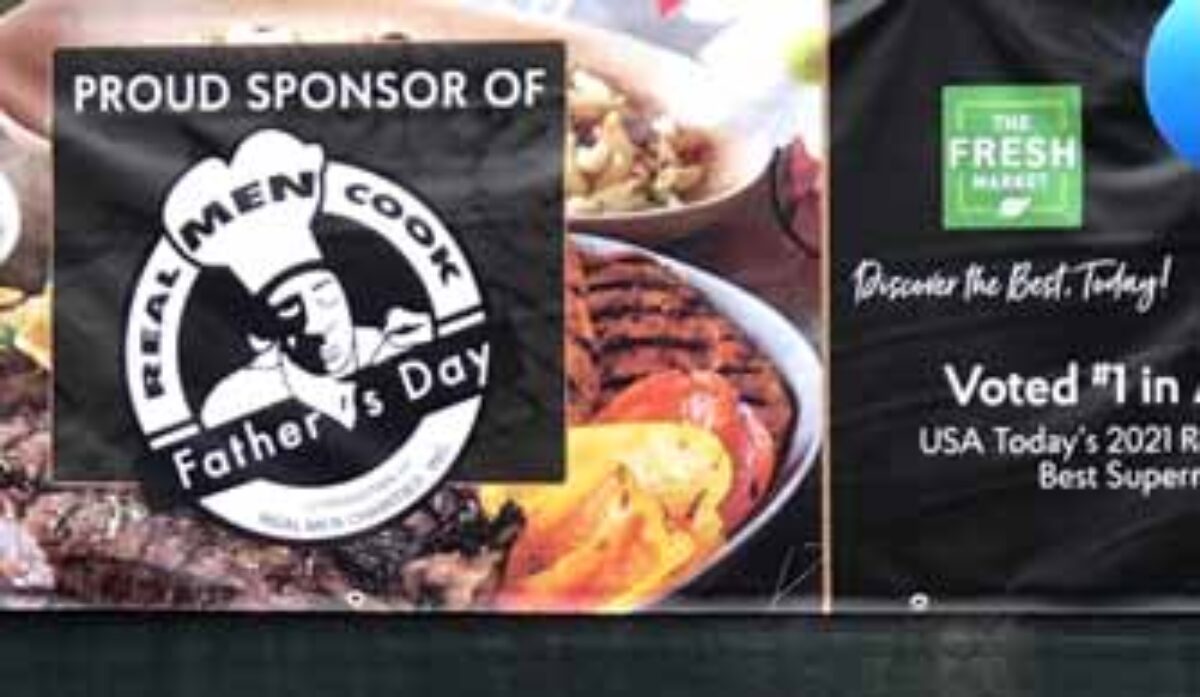 The 2021 Real Men Cook celebration was a Happy Day on many levels and for many reasons. It was a return to being out, to seeing friends, and to making new friends after 15 months of the COVID lockdown. It was also a time to enjoy the outdoors and to – of course – eat food prepared by REAL MEN.
The event was held at the Quarry Event Center, 2423 E. 75th Street, — corporate headquarters of Real Men Charities the charitable arm of Real Men Cook. For some, it was their first visit to “the Quarry,” and they got the chance to see – and enjoy — the space.
While the weather forecasters predicted torrential rain, thunderstorms, and even a tornado, the day was sunny and bright, which matched the smiles and the good feeling of the day. The beautiful weather and the good vibe were invitations for everyone to spill out onto the patio, which was beautifully decorated with tables positioned in a socially distant style.
Hundreds came out to enjoy the fun, fellowship, and the opportunity to pay tribute to fathers. This love was at the heart of the event, which marked its 32nd year anniversary. National sponsors were Lowe’s Home Improvement, BET, Heinz, Beyond Meat, and The Fresh Market. Local sponsors were the University of Chicago Medicine, Aetna Illinois, and The Black Star Project. Cooperating sponsors were The Black Foodies, Black Chicago Eats, South Side Drive Magazine, and The Quarry Event & Entertainment Center. Real Men Cook was held in partnership with The Samuel DeWitt Proctor Conference (SDPC). Its mission is to nurture, sustain and mobilize the African American faith community in collaboration with civic, corporate, and philanthropic leaders to address critical needs of human rights and social justice within local, national, and global communities. SDPC seeks to strengthen the individual and collective capacity of thought leaders and activists in the church, academy, and community through education, advocacy, and activism.
Rael Jackson, president of Real Men Cook, said that the mission of the SDPC aligns with that of Real Men Charities. “With Real Men Charities broadening its mission to embrace social justice, this alliance makes for an ideal partnership.”
At the same time, as part of a virtual celebration in Atlanta and in Charlotte, internationally known Chef Jernard Wells hosted a Father’s Day jam that featured fellow chefs sharing memories and nuggets of wisdom.
Cook County Treasurer Maria Pappas was one of the luminaries who visited and extended Happy Father’s Day greetings. She was joined by media figure “Candid” Can-dace Jordan, Fresh Farms’ owner Dean “Dino” Svigos, and his three sons Dean, Alex, and Niko. In what Pappas calls dispensing “random gifts of kindness,” Fresh Farms, the Chicago-based food company, partnered with the Treasurer to gift everyone with boxes of truffles. Dino quipped that he was “delivering truffles and delivering smiles.”

“We are excited to have Treasurer Pappas with us on Father’s Day,” said Jackson. “She shares important information about property taxes, which is something that our families need to understand in order to build better communities, which is the real goal of Real Men Cook. The food is the hook.”
Echoing his sentiment was Yvette Moyo, co-founder of Real Men Charities who conceived Real Men Cook and an Honorary Cook County Deputy Treasurer.
Addressing the enthusiastic crowd, Pappas said: “It is a duty and a privilege to honor our fathers on this special day.”

The men grilled, cooked, and showed off their culinary skills in the main stage area.
The appreciative crowd was treated to an array of food delicacies prepared by fathers, father figures, “weekend” chefs, and professional chefs who gave of their time to serve. Among the chefs who prepared their favorite dishes to share included veteran chefs who have been cooking at Real Men Cook for decades and whose fathers were part of the original celebration 32 years ago. But as a contrast, first-time cooks came and got caught up in the spirit of REAL MEN COOK.
Eriq Daniels delighted the “eaters” with his Honduran Rice. He said he’s been cooking at Real Men Cook for 15 years.
Donned in his apron and boasting that he is the father of four daughters and four grandchildren, cook Jeffrey Jones prepared his chicken breast, which he said was “seasoned with love.”
Chef Don Rose cooked up his spring steak and roasted corn. Rose has been cooking at Real Men Cook for 20 years. He confessed that one reason he keeps coming back to cook is because he loves when men get together.
Loren Taylor, who cooked and served salmon and baked grits revealed that this was his first year at Real Men Cook. He said that he was helping Chef Sean Myers.

Johnathan Carthon of the Bougie Melon, excited the crowd as he served his signature banana pudding while breaking into a rousing rap. He said he has a special attachment to Real Men Cook. He launched his company in 2018 and participated in Real Men Cook in 2019. Since the pandemic forced the cancellation of in-person serving in 2020, he was glad to be back this year.
Those who attended represented a broad cross-section of the community, including hard-working males who are bound by their resolve to uplift the African American family and give something back to the community. Most were happy to be out of the pandemic bubble and having a good time.
Anita Elion said she had been hibernating during the pandemic but she decided to take off her mask and come to Real Men Cook. She was effusive in saying she had a “beautiful time.”
Dr. Niva Lubin Johnson was relieved and said she was “glad that we are back and in person. I’ve been coming to this event for years and at its various locations. This is an opportunity to celebrate with others and to see men showing their culinary skills. Ultimately, this is an event for us.”

Pam Morris – WVON – Gospel sister – was effusive in her praise. “The food is delicious and this is a wonderful experience for me and my whole family.”
Cassandra Henry said she came out in tribute to her Dad who died of COVID three days after Christmas. “God has blessed me and I come in memory of my Dad,” she said.
Christin Jones, a first-time attendee who came with her parents, said she loved the food – — especially the grits and salmon.

Out in the patio, friends munched, talked, and renewed friendships. A circle of friends found their niche in a corner and basked in the flow and rhythm of the day. They all agreed that this was “a beautiful event.”
Capturing the spirit of the day were ABC7, NBC5, WGN-TV, and Fox Chicago who came out, documented the festivities, interviewed the crowd, and got the take of the day from Moyo and Jackson. Earlier in the day, Jack-son appeared on ABC7 morning news inviting the public; Chef Sean Myers demonstrated how to fix a shrimp/avocado/citrus dish on WGN-TV.
At the close of the celebration, Ayinde Cartman – executive director – Real Men Charities — and his brother, Dr. Obari Cartman, program director, lit up the crowd with their drum and bongo playing.
Overall, the 32nd Real Men Cook celebration achieved its purpose: to highlight African-American men as dedicated family men willing to sacrifice THEIR day to serve food, be a part of the vibrancy of the day, and to exemplify love.
Yvette Moyo paid tribute to the sponsors whose generosity and support made the post-Covid celebration a reality. She was especially ecstatic by the turnout, the love everyone shared — and the beautiful weather.

this article is courtesy of southsidedrivemag 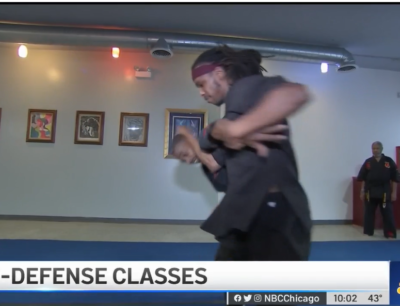 Chicago Self-Defense Class Spurred by Rise in Attacks Against Women 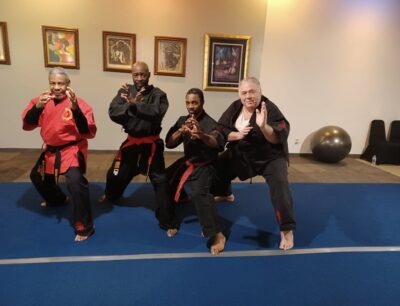 Our presence on Far East 75th Street has nearly eliminated incidents of violence, from Yates to the Lake. African drummi 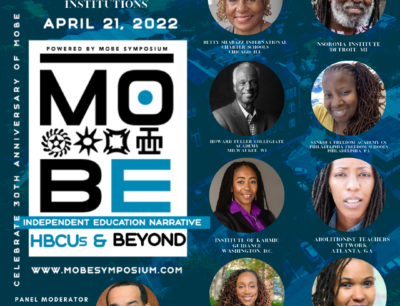 Independent Education Narrative: HBCU and Beyond

Innovate or die is the spirit as we play nationally and locally in business. This communication is to request that you c